Rancid Rabbit (voiced by Billy West) is the stereotypical authority figure and is a semi-antagonist and occasionally an anti-hero of the series. He has a lot of jobs like police officer, life guard, prison guard, firefighter, boss of various businesses, principal, president, mayor, Egyptian pharaoh, doctor, TV host, contest judge, store and Taco Depot manager. In one episode, he appears as a principal at a school and at the end, as a police officer. He also was seen as a dentist in "Teeth for Two." He also was a lifeguard in "Escape from the Deep End." He also had a restaurant named Rancid Rib Room in "Sumo Enchanted Evening."

Rancid's roles differ depending on the plot of the episode. Sometimes, he takes advantage of CatDog as much as he can by deceiving them into buying his products or pushing them to do his bidding in a job. Rancid sometimes trys team up with the Greasers to destroy CatDog's creations. He does whatever it takes to take their money or benefit himself in any way, even if it means abusing his power to the fullest degree. However, he is shown to help CatDog when he works as a doctor whenever something goes wrong between the two, so he can sometimes be seen as more of an anti-hero than a villain. He constantly says "Leaping lumbago." and "What, what, what?" Rancid owns a mall called the Mall of Malls (a parody of the Mall Of America), and he has a spoiled niece named Rancine. Rancid also has a cousin named Rotten, who lives in Farburg.

Rancid Rabbit is a green rabbit with a pair of upper incisors, pink nose, blue tuxedo with a red bow tie, blue jeans with boots.

Rancid's pants are dark blue and the shoes are brown

Rancid's skin is secretly pink, as revealed in the episode "Cone Dog." 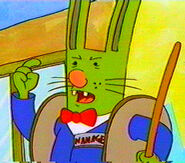 As the manager of Taco Depot 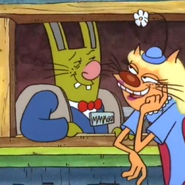