Lola Caricola (voiced by Nika Futterman) is a female Mexican-accented yellow-bellied whip-poor-will, introduced in the second season "Sweet and Lola" and the third tritagonist of CatDog. She is a zoologist, and CatDog's next-door neighbor. She gained a love of zoology while wrangling bulls on her family's ranch. CatDog found her annoying until they saw her drive off the Greaser Dogs single handedly (although Cat is still upset when she eats his doughnuts). Her catchphrase is "Unbelievable!," said in her Mexican accent whenever observing something she finds fascinating (often CatDog during private moments). Cat might also have a crush on Lola (other than Shriek Dubois). Lola might feel the same way about Cat. She cares about Cat and Dog from the bottom of her heart. 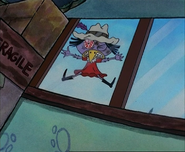 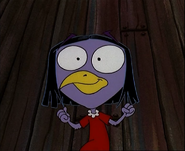 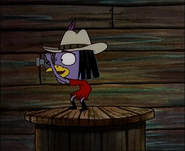 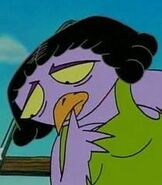 Lola's mom
Add a photo to this gallery

Retrieved from "https://catdog.fandom.com/wiki/Lola_Caricola?oldid=15260"
Community content is available under CC-BY-SA unless otherwise noted.