Clifford Maurice Feltbottom often called by his nickname, Cliff, is the macho but dimwitted leader of the Greaser Dogs and one of the main antagonists of the show. Look at him wrong, and he'll pound you with his cinder-block-like bulldog paw. He may pound you even if you look at him right. Fortunately, Cliff's got the mental capacity of a pack of dog biscuits, so he's easily outsmarted. He enjoys beating up CatDog. The character is often annoyed by Eddie the Squirrel, who longs to be a greaser dog-like him.

Cliff is 20 years old. He likes pounding CatDog and he dislikes CatDog (mostly Cat), people who try to be smarter than him, and all cats (with a few exceptions such as female ones). He is voiced by Tom Kenny, who also portrays Dog.

Cliff is the muscular, yet fat leader of the Greaser Dogs, a trio of bullies who harrass CatDog. He is very short tempered and speaks similarly to Winslow with a Brooklyn accent. The character enjoys beating people up and will almost always succeed in causing pain. Late episodes reveal softer sides of Cliff, such as his love for ballet and cashmere. Though he is easily distracted, he usually gets his way. Winslow, on the other hand, sometimes teams up with the Greasers and harass CatDog. He got a taste of his own medicine when Eddie was accidentally glued to his jacket, which turned them into "Squirrel Dog". Once this happened, Shriek and Lube kicked him out of the Greasers because now he was a two-headed freak. Cliff learned the pain of being an outcast and what CatDog go through. However, once he was free of Eddie, he returned to his old bullying ways and rejoined the Greasers. In another episode, when he is trapped under a massive weight for several days, he made a solemn vow to never bully anyone (especially CatDog) again should he escape this fate, though it did not last very long. One episode says that he was not an only child; the proof is a niece.

Cliff is an orange bulldog with red hair and red nose. He wears a leather black jacket with a picture of a dead cat on the back of it (with a T-shirt under the jacket), red pants, and engineer boots. He also had dark red spots over both of his eyes.

this is a gallery of Cliff. Please do not post fan arts or inappropriate images. 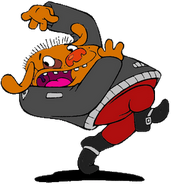 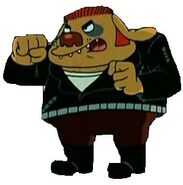 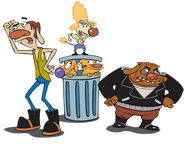